here's a traffic flow from stop to go and stop again. if you are in Manila you'll be used to it. sometimes you can finish several chapters of a book, sleep for more than an hour and it can sometimes torture your fingers when texting. 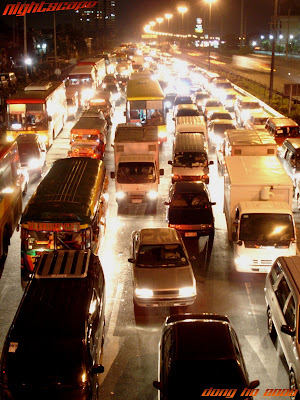 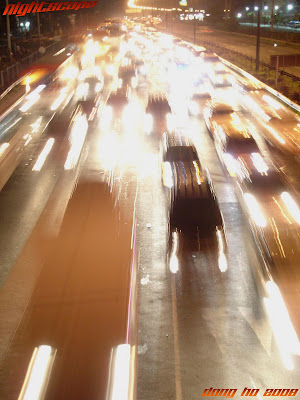 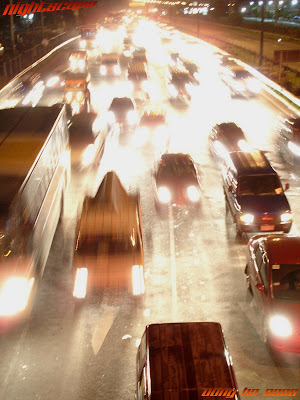 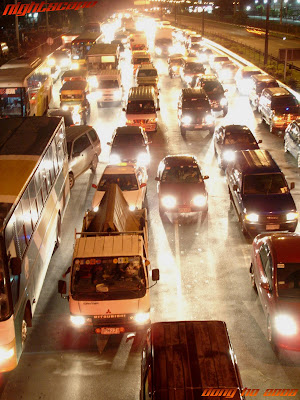 Love it...be careful on that bridge!!!

the stretches of lights always amaze me...

passing thru C5 these days is a torture. the effect stretches as far as Katipunan and Pasay.

best way to battle irritation is to make the most of it. reading a book or catching some sleep are sure traffic-beaters.

ely, i also like shots like these but it also depends on how fast the vehicles are running. the faster the better.

hi arlene, C5 is now as busy as EDSA on peak hours. but at least in C5 there's no bus.

i think you can finish the book "12 little things..." by alexander lacson on one journey from North EDSA to EDSA Taft on rush hours.

Those are some cool pictures! What kind of camera do you have?

that is the very reason why i hate manila. ugh! if only i have a magic wand....

nice captures again. the scene seem serene, surreal, yet in reality it is chaotic, noisy, stressful. the wonders of photography!

beautiful series of photo, it makes me relive the city.

You are an amazing photographer. Were you on a bridge?

I have learned the best cure for traffic is a good book on CD! Might as well learn something along the way or during the stand still!

naku dom, because i live near where i work, i really don't miss the traffic especially along edsa. i feel it's a waste of fossil fuel and time because the very few times i drive and negotiate along edsa's traffic, parang nagpunta na ako ng pampanga. c5 is a bit better in some parts but meron na ring bottlenecks here and there. stay safe bro!

dakilang islander, hahaha... that you can be very thankful.

hi ifoundme, road becomes smaller because of exceding and rising number of vehicles.

barry, very well said. it looks so good from the outside but never when you're the one in it.

hi maya, thanks. city life that is.

hi bid yan, the photo was taken at the coastal overpass in paranaque. the vehicles are coming from cavite and las pinas.

hi sandy, thanks. i'm on top of an overpass along the highway. that's definitely something you can do. i usually read a book or magazine when im alone or chat with people when i have a companion.

oggie, you're right. sometimes it even led me to thinking that pampanga to QC is closer than makati to QC. that's the best thing when you live near your workplace.

hi mimi, exactly. you can be play with the lights to make artistic shots.

Great shot, Pards but be very careful where you post yourself when you take such pictures. We want you to keep posting great pics but we don't want you to get hurt in the process.

Have a great weekend!

good shot as always, esp with those lights... but still traffic really pissed me off.. he he he..

panaderos, thanks. i normally monitor the area before i position the camera.

I love the motion of the second and third photos.

...sometimes I feel that all my life is in the "rush hour" :D I specialli like the second and third photos...great motion feeling!

Great motion shots. Traffic can be a terrible thing nowadays especially in SLEX.

hi karen, thanks a lot. i'm glad you like it.

l.reis, thanks. sometimes i also experience that kind of feeling. coz few days from now marks the end of the second half.

hi rachel, you're right because of the on going repair and expansion. at least there's an improvement going on.

Oh traffic, traffic... probably jams in Manila are not worse than here in Bangkok. Funny, once I took a taxi to go downtown and to be on time I asked the driver to take the toll-highway... only to get in a highway traffic jam :)
You know, most of the roads here have at least 2 lines in each direction as a minimum, larger ones even 4. In Denmark highways have 2 lines (and there aren't that many of them - small country), maybe 3 somewhere around Copenhagen... on a lucky day :)

hi laura, here in metro manila, some places have small roads and the vehicles are excessive. traffic here are at its worth at peak hours but good because we have the transit on major highways.

the light falling on the road is very beautiful.i can imagine how boring it would be to wait at traffic lights for long.

hi,
can i use one of your pics for my traffic site?

i've been looking all over the net and i found yours, i kinda like it.

if not, thanks anyway