what is your slingshot?

Last night we celebrated the birthday of Erik, who is a part of our action group. We gave him a slingshot as a gift which resembles the sling that David in the Bible used. Erik has a character like that of David. Young and active in his faith. This story was also significant to us because of the slingshot. 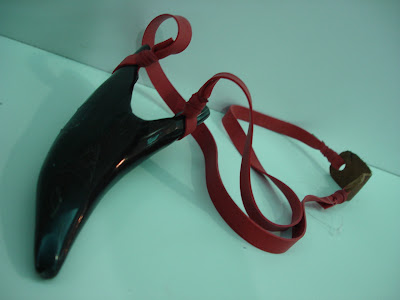 David's story of beating the giant Goliath is one of the most popular stories in the Bible. Allow me to show you the significance of David choosing to use the slingshot rather than the sword that Saul was giving him to beat Goliath. Here's that part in the Bible:

37 David said "The LORD who saved me from the claws of the lion and the bear will save me from this Philistine!" Saul finally consented. "All right, go ahead," he said. "And may the LORD be with you!"
38 Then Saul gave his own armor--a bronze helmet and a coat of mail.
39 David put it on, strapped the sword over it, and took a step or two to see what it was like, for he had never worn such things before. "I can't go in these," he protested. "I'm not used to them." So he took them off again.
40 He picked up five smooth stones from a stream and put them in his shepherd's bag. Then, armed only with his shepherd's staff and sling, he started across to fight Goliath.

And of course we all know what happened. During that time the sword was one of the best weapon plus the armor, helmet and the coat of mail for defense. This was what they thought David would need to beat Goliath. David who was never used to wearing these for fighting lions to protect the sheeps, chose to bring with him his staff and a sling.

What is your slingshot then?

I suggest that you read the whole story of David beating Goliath and you'll also learn that it was more than just his slingshot. It was more of who God is in his life.
Posted by escape at 11:55 AM

nice, i have not considered to ponder the story of David and Goliath in that way,
we can also say that given the resources that we have to face the monster challenges in our lives, faith can increase our chance of winning the battle...plus our slingshot.