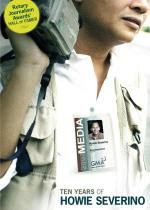 He is passionate and witty as well. His ingenuity can be seen on his television documentaries. He enjoys every travel at the same time able to spend a good time with his family and his bike named “Bughaw”. Here’s the online interview.

the dong: What is your most critical role as a journalist?
Howie: I tell true stories about subjects that matter to viewers.
the dong: What was your most dangerous experience as a journalist?
Howie: covering the siege of Lamitan (more details in Howie’s blog)
http://www.gmapinoytv.com/sidetrip/blog/
the dong: How many people usually joins you for a documentary?
Howie: From two to four people.
the dong: What is your dream topic for a television documentary?
Howie: Secret.
the dong: In the future, who do you want most to meet or interview? Why?
Howie: Pampanga governor Panlilio, Barack Obama, Nelson Mandela, David Byrne, Condoleeza Rice. I admire them for their achievements, intellect and courage.
the dong: You visited many cities and provinces in the Philippines, what was the weirdest experience so far?
Howie: Finding Blind Fish in a cave in Samar.
the dong: Aside from naming your bike "Bughaw", what other personal things do you name?
Howie: I use to name my vehicles, now only my bike.
the dong: What else have you not tried doing and that you would most likely not do?
Howie: Sky dive, climb Everest, drive a truck across the Iraqi desert.
the dong: What do you want the younger generation of Filipinos to learn from you?
Howie: Work hard, read a lot, ask plenty of questions, love our country.
dong: As Filipinos, what should we never forget about our culture?
Howie: That our culture could produce a man like Rizal.

the dong: Thanks a lot for your time despite the busy work.

I am impressed as he will always be serving in his field as long as he can. He is very proud to be a Filipino and that’s basically what we need to be in the coming years. Howie is just one of the people who by his works and his lifestyle shows the true value of a Filipino.

Again you can check out his blog at
http://www.gmapinoytv.com/sidetrip/blog/

The DVD compilation of Howie’s documentaries entitled “Ten Years of Howie Severino” is now available. It features ten of his best television documentaries. Each episode is as special as the others. So better check out the other episodes hopefully it will also be compiled in the DVDs soon.

I am sure that he and his group will continue to gain more awards and appreciation for his works in the coming years.
Posted by escape at 10:05 AM